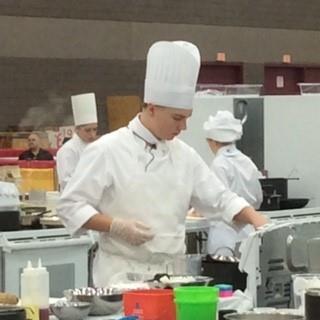 While known as a quiet young man, Portsmouth High School Senior and Culinary Arts student Carson Crisp is racking up accolades that will soon make it difficult for him to not step into the spotlight.

“I personally think I am more amazed at what he has accomplished than he is of himself,” noted Chef Perrin Long, who is Crisp’s Culinary Arts instructor.

Some of Crisp’s most notable accomplishments include first place at NH’s SkillsUSA Hot Food Competition last March followed by a 7th place finish at the Skills USA National Championship in Lexington, KY in June. Most recently, he earned the coveted ProStart National Certificate of Achievement. To earn the certificate, students pass two national exams, demonstrate a mastery of foundational skills and work 400 mentored hours.

“It is a great feeling that after my two years of work I’ve completed all the necessary requirements to receive my COA [Certificate of Achievement],” Crisp noted. “It is made better by knowing that I am one a few students—if not the first—in NH to receive this award.”

Earning a COA provides students with distinct advantages in their job searches and opens the door to collegiate opportunities, as numerous restaurant, foodservice and hospitality programs offer benefits to ProStart graduates. These benefits include scholarships, class credits and credit towards work experience requirements.

According to Chef Long, Crisp distinguishes himself in one key way. “Carson has the ability to absorb and synthesize important culinary concepts and translate them effectively in how he cooks and works in the kitchen,” he said.

Noting he has been accepted to the Culinary Institute of America, Chef Long said Crisp’s restaurant experience includes a position at Martingale Wharf, while he is currently employed by Chef Matt Louis at the Franklin Oyster House in Portsmouth. In looking ahead for Crisp, he said his immediate future entails trying to replicate his success from last year.

His next competition is the NH Skills USA Culinary Competition on Friday March 18th at the Seacoast School of Technology in Exeter. (Writer’s note: Crisp won gold again and will head back to Louisville in June. Follow-up article to appear in next month’s newsletter).

“This is the competition he won last year—and if he can place 1st again he would again travel to Louisville, KY in June,” Chef Long added.

Expressing his belief he is ready for this next round of competitions, Crisp acknowledged he did not feel quite so confident last year. Citing Chef Long’s encouragement as essential, he said he could not help but smile as he walked up to receive his award.

“I went into the national competition feeling more confident in my skills than when I went to states,” he said. “At the end of the competition, I felt I had done my best and was happy with what I had done. When I found out I had placed 7th in the nation, it was a great feeling because that is the highest any culinary competitor from New Hampshire had placed.”

As for where he imagines Crisp will be in 10 years, Chef Long said the sky is the limit.

“I would imagine he would be a Sous Chef at high level restaurant, perhaps a Chef at a smaller restaurant or even own his own business,” he said. “As you know, it is hard to qualify what success looks like for anyone individual. I simply know in my heart that success is likely to find Carson.”