The result of a discussion at a Public Relations Committee meeting in the spring of last year, the Ambassador Program at Nashua Technology Center (NTC) has experienced significant success in just its first year. According to Instructor Jeff Leone, who helped develop the program along with Martine Cloutier and Judith Loftus, the impetus behind it was to help current CTE students meaningfully connect with potential prospects.

“In talking with students currently enrolled in CTE programs, many indicated that ‘word of mouth’ and actually having seen the classrooms—a tour, passing in a hallway, having a friend in the program—often was the way they learned about our programs,” he said.
Upon returning to school in the Fall of 2015, he said they asked other CTE instructors to nominate between 3 and 5 of their strongest students to serve as NTC Ambassadors.

“We ended up with over 40 students nominated,” he said. “Ambassadors were asked to attend an initial information meeting where the program was explained to them and applications were completed. We also had the opportunity to speak with these outstanding students about their experiences in the CTE programs and the message they would want to share with other students.”

He said one of the primary goals of the Ambassador Program was to have student representation of their CTE programs at various events throughout the school year. He noted that the biggest event in which the Ambassadors participated was their CTE Round Robin event held the week before course selection. Noting most CTE programs are 2 year programs with students typically beginning in their junior year, Leone said the event provided ambassadors from each CTE program with the opportunity to meaningfully talk to the sophomore class.

“These younger students then had an opportunity to try out the program through a ‘hands on’ experience during our school’s ‘e-block’ period,” he said. “Because the activities were hands on, it was a great way to engage potential students and promote the programs—and because the event was held right at the start of course selection, the courses were fresh in the minds of students.”

According to Leone, ambassadors are currently providing tours of CTE programs to administration, community members, and middle school students that visit the high school. He said they have participated in elementary and middle schools’ STEAM nights and will also be involved in their ‘Push Up Night’ for rising 9th graders.

“In the coming months, our CTE instructors will select the next ‘crop’ of students to be Ambassadors for next year and our current Ambassadors will train them,” added Leone, who noted that preliminary numbers show increased CTE enrollment.

Current ambassadors may be the predictor for the program’s ultimate success, as many have expressed enthusiasm regarding their experience. One current ambassador remarked, “I’ve been able to promote a class I love and see other people get excited to take it. I’ve also been able to see what other CTE programs are like, which can be helpful when helping someone figure out what classes they should take.”
Expressing excitement at its future, Leone said the Ambassador Program underscores a very important message, which he hopes reaches communities outside CTE.

“Career and Technical Education is real life education,” he explained. “It prepares students for what they can expect in the real world, gives them hands-on experience, and simulates real life situations.”

He also expressed admiration and respect for the role the ambassadors have played in the program’s initial success.
“These students are the best of the best,” he said. “They are practicing their skills learned in their respective classes by selling it to others, teaching skills they have learned, and sharing their experiences, and how it has helped mold them as a future professional and as a person.” 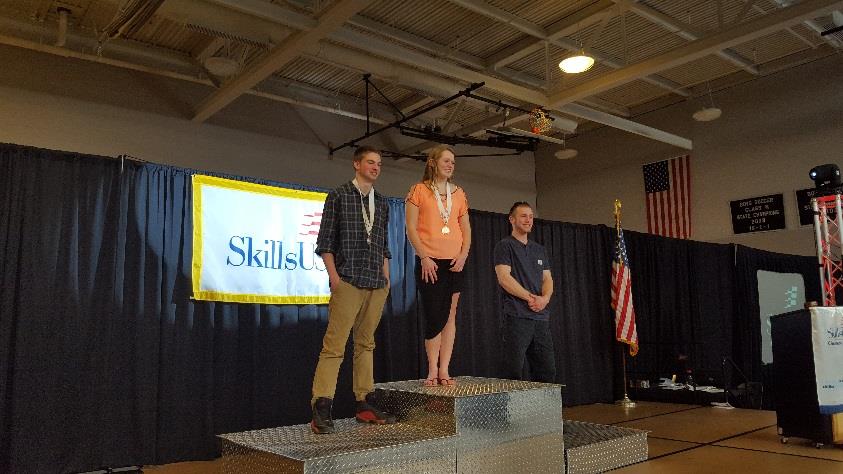 In just her second year as a welding student, Senior Kayleigh Eastman has already experienced tremendous success, as she recently won gold in the SkillsUSA NH welding competition. For Dennis Carrier, her instructor at the Berlin Regional Career & Technical Center, her accolade exemplifies a winning attitude.
“Kayleigh is an achiever who works hard in the shop and utilizes her time in to become the best she can be,” he noted. “She was also willing to spend time after school in the shop a few days a week for the month prior to the competition.”
In winning the state championship, which entailed that she complete a written test and demonstrate her skills in four practical welding processes, Kayleigh qualified for the national championship in June in Kentucky. It is an opportunity no female has ever experienced in New Hampshire before.
“Both my teacher and I remember having a conversation and I said that I wanted to be the first girl to make it to nationals,” she said. “I am still in disbelief that I accomplished this because this has been a dream of mine since I was in the introductory class.”
Noting that winning the award has made her feel “very thankful for being able to be in such a great program,” Kayleigh acknowledged she had to dig deep in order to achieve her goal.
On competition day, I was a bit nervous, but the judges did a good job of creating a welcoming environment for all of the competitors,” she said.
“Winning the state competition was an especially great honor since I was the only girl,” she added. “Being the only girl was something that further fueled my initiative to get better because I wanted to prove girls can weld just as good.”
While demonstrating proficiency in welding is of course critical, Carrier cited other practical skills that are developed in the CTE program.
Throughout the program, she has learned leadership skills, the ability to work independently, and how to work with others to complete projects,” he said. “She has also learned how to perform under pressure.”
For Kayleigh, her experience in the welding program at the Berlin Regional Career & Technical Center has been decidedly positive.
“My favorite part of the program is being in a class that feels like a family,” she said. “Everyone is very supportive of each other. The program also offers many great opportunities like being able to compete for SkillsUSA and having the option to get certified in Structural Steel Unlimited.”

SkillsUSA is an applied method of instruction for preparing America’s high performance workers in public career and technical programs. It provides quality education experiences for students in leadership, teamwork, citizenship and character development. It builds and reinforces self-confidence, work attitudes and communications skills.
SkillsUSA is a national nonprofit organization serving teachers, high school and college students who are preparing for careers in trade, technical and skilled service occupations, including health occupations. SkillsUSA is a partnership of students, teachers and industry representatives’, working together to ensure America has a skilled work force. To learn more, visit SkillsUSA.org.