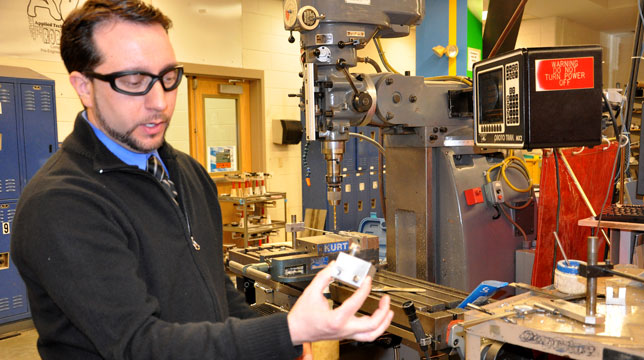 Not one to promote himself, Frank Xydias, high school engineering teacher at Milford High School, acknowledged surprise when he learned that a student–or several –nominated him for the iRobot -STEM -MVP teacher of the year award. He was even more surprised when he found out he won.

“I was happy, excited and honored at the thought of receiving such a prestigious award,” he said. “I then shared this news with family as it is a wonderful feeling to be acknowledged by a student…To have a student take the time to recommend me for an award such as the iRobot -STEM MVP award truly is amazing.”

The unexpected accolade, which culminates in receiving his award on September 12 at Fenway Park and being introduced on the field, serves as a source of reflection on why he chose a career in education.

For Xydias, his chosen career field in STEM, which sometimes is referred to as STEAM with the ‘A’ standing for Arts, has never been more exciting.

He cited Milford’s Young Inventors program as one example. In this program, students create their own invention and present it in a professional setting.

Another program for which he expressed fondness is STEAM Nights, which provide opportunities for all Milford students to learn about career pathways offered in STEAM career paths.

As a result of these and other STEAM programs in the Milford School District, Xydias said they received personal invitations to participate and register for the Massachusetts STEM conference as a panel member for the Young Inventors organization.

“This will highlight some of the tools Milford uses to increase student participation and STEM awareness,” he explained.

They will also present at the Christa McAuliffe Technology Conference in October.

Xydias is also involved in the New Hampshire Joint Engineering Society, which is opening its doors to students at 13 school. Each school can bring 3 students and teachers to the conference.

“Students will be displaying projects as well as attending the open workshops to learn about current technology,” he said. “We have groups from FIRST, Young Inventors, PLTW, NHDOT TRAC, VEX robotics and STEM groups attending.”

In the summer, Xydias works with Manchester Community College and hosts a series of 5 STEM camps for middle school students. As part of the school’s summer learning series, he said they bring students off site to visit local engineering companies.

“Roughly a quarter of the students attending these camps attend my STEAM nights because they realize their learning and passion should not stop during the 180 days they are in school,” he said. “They learn to seek out opportunities for success.”

As for why Xydias stays so motivated about STEM or STEAM year round, he cited those “a-ha” moments experienced by students. One such moment occurred last year when he brought 50 female students to the Girls in Technology event at Manchester Community College.

“I was sitting in on a lab and watched the lightbulb of excitement and wonderment fill on each of the students’ faces,” he said. “This is the excitement that I see on the faces on my students in my class.”

He sees this excitement off-campus, too, especially when they visit local companies.

“Companies like Hitchiner is not just another company to that student,” he said. “It is a place they could work, a place where they have a connection, a place they can better understand.they have a connection to, and a better understanding of our community partners…Seeing that excitement in a student’s face is just one of the reasons why I love what I do.”