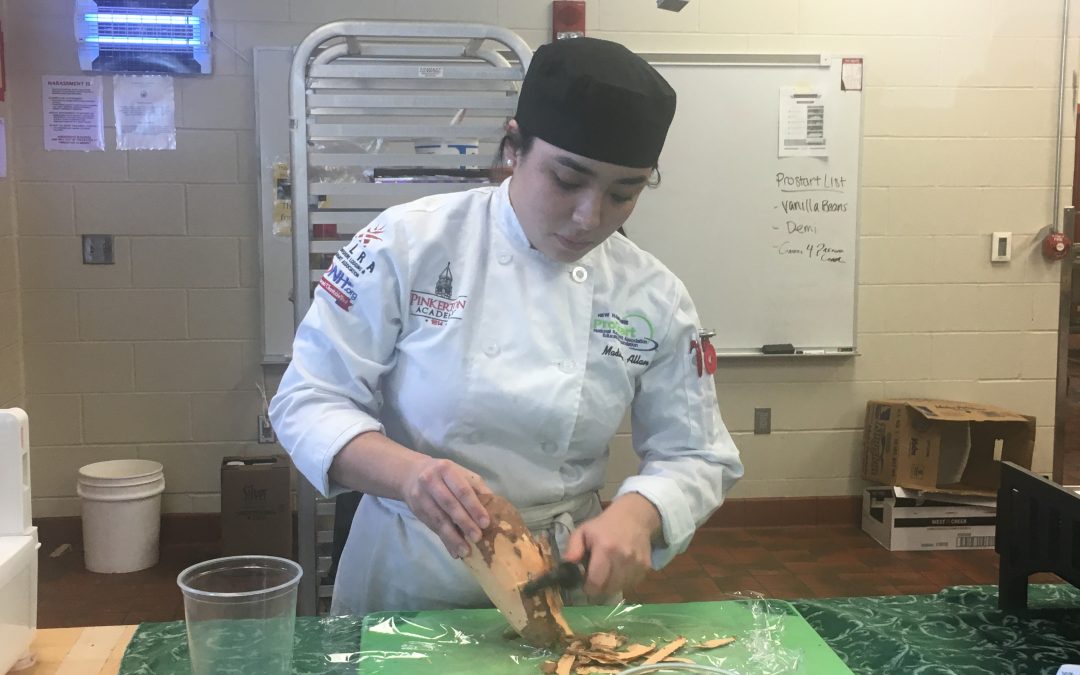 Students get a ‘Head Start’ with ProStart

On Monday, March 11, students from more than half a dozen Career and Technical Education (CTE) Centers will compete in the NH ProStart State Invitational at the Executive Court Banquet Facility in Manchester.

During the culinary portion of the competition, participating teams demonstrate their creative abilities through the preparation of a three-course meal in 60 minutes with just two butane burners and no access to running water or electricity.

Madison Allan, a senior at Pinkerton Academy who competed at last year’s event and will be there this year, too, described the experience as “pretty tense.”

“Seeing the other competitors can be unnerving, but you want to feel confident going in,” she said. “Going first or last is also a little scary because all the judges are focusing on you.”

During the restaurant management competition, students will design their own restaurant in ProStartville and present to a group of judges their concept, menu and costing, marketing, critical thinking and operations.

For Allan and her teammates, the pressure is especially heavy, as Pinkerton Academy has won the competition two years running.

“Everyone is looking at you to fail, but I feel we are prepared to go in to defend our title for the third year in a row,” she said.

For Allan, the competition and the ProStart program itself is more than a great experience; rather, it is a springboard for her future. After graduation, she hopes to attend UMass Amherst for Hospitality and Tourism management. She also plans to work in a restaurant or hotel during school to learn more about the industry.

“ProStart has taught me a lot of skills like handling tasks under pressure,” she said. “Personally, I do better under pressure, and I feel that’s very important to have in this industry because you’re dealing with people daily. This can help me excel in whatever job I have in the future. It’s actually helped me at my current job many times.”

Amie Pariseau of the New Hampshire Lodging & Restaurant Association said Allan’s experience is representative of what takes place in ProStart.

“ProStart’s industry-driven curriculum provides real-world educational opportunities and builds practical skills and a foundation that will last a lifetime,” she said. “By bringing together the industry and the classroom, ProStart gives students a platform to discover new interests and talents to open doors for fulfilling careers.”

The annual statewide competitions as well as ones at the national level, she said, help set “a high standard of excellence for students and the industry.”

“Students who have completed the requirements of the ProStart program are awarded an industry-recognized certificate,” she added. “To earn the certificate, students pass two national exams, demonstrate a mastery of foundational skills and work 400 mentored hours.”

Aside from technical skills, Allan cited a more practical outcome from the program.

“The best part of being part of Prostart is obviously learning and utilizing different skills, like efficiency and organization, but most importantly making friends,” she said. “I met a lot of great people the last two years and still keep in touch with some of them.”

As for her thoughts on the competition in March, Allan said she is confident, but did admit some nerves, too.

“I would be lying if I didn’t say I still feel pretty nervous,” she said. “Anything could happen that you can’t plan for and that’s the scary part. Hopefully at the end, we put up some awesome plates that amazes the judges.” 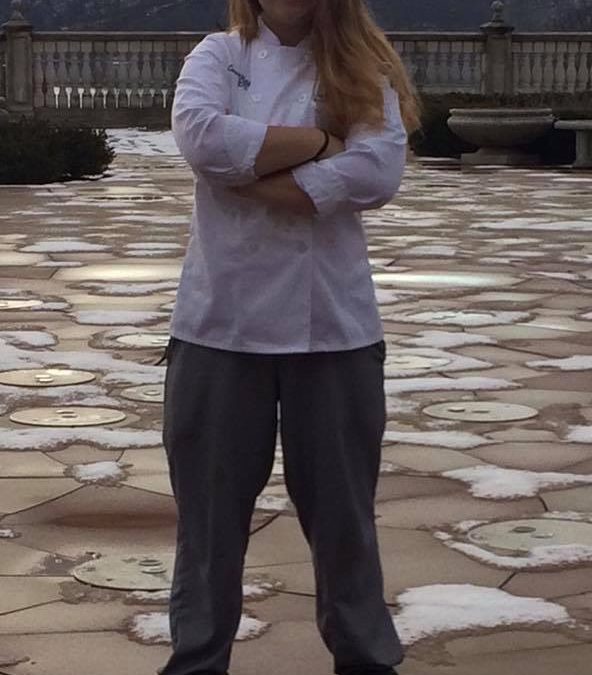 According to Salem CTE Center Chris Dodge, one consistent challenge to enrollment in their programs, which range from Automotive Technology and Culinary Arts to Digital Graphic Applications and Marketing and Sales, stem from public misconceptions.

“There are many people in the general public that refer to what we do as vocational training,” he noted. “That is not what we do at all.”

Noting their programs lead to industry certifications, college credit, post-secondary placement and employment, he said the emphasis of Salem CTE Center–and any similar center across the state–is on college and career readiness.

“We are creating pathways to meaningful careers and sparking students’ interests through experiential, hands-on learning,” he added. “CTE programs are rigorous and can help launch a student’s career.”

Rhonda Haley agrees with Dodge and said her daughter’s experience at Salem CTE Center was invaluable.

“It gave her hands on learning and expertise that she would not have otherwise received at Windham High School,” she said.

Upon completing Culinary Arts at Salem CTE Center, Haley’s daughter Cassie went on “to flourish” at at Culinary Institute of America (CIA) in Hyde Park, NY. Cassie is now a front of house MIT (manager in training) for Compass Group, the largest restaurant management group in the United States.

“Both Chef Stuart, before his departure, and Chef Bratz gave Cassie insight not only into the work force, but into expanding her education past high school,” Haley said. “They were able to share their knowledge and visions, which helped Cassie in the decision making process for her own success…Cassie owes so much to the CTE program.”

Cassie agrees with her mom.

“The culinary program [at Salem CTE Center] had similar teachings that my first class at the CIA also provided me,” she said. “This allowed me to be a step above my fellow classmates that did not have a similar class in high school.”

Cassie received her Associates Degree in Culinary Arts in the spring of 2017. She was then accepted into the Bachelors program for Culinary Science and graduated December 2018.

“Cassie shares her alumni status with some of the greatest chefs in the world, including celebrity chefs Anthony Bourdain, Cat Cora, Michael Symon and Todd English,” added Rhonda.

For those still on the fence about CTE programs, Rhonda said she hopes her daughter’s experience helps illustrate what is actually taking place with NH’s CTE centers.

“For Cassie, [CTE] was the foundation for her college education,” she said. “It gave Cassie real life experience while learning and growing. Cassie found herself in that program–she grew and flourished into an amazing Chef.”

For any parent who wants to provide their children with every avenue to learn–whether it is engineering, business, or culinary, Rhonda said CTE programs “open those doors.”

“It gives them hands-on learning and education that can’t be taught straight from a book,” she said. “Giving students every opportunity to learn and spread their wings is what CTE is about.”

Cassie agrees and added, “CTE is not just an industry program that allows students to gain a certificate and bypass college. It opens up different possibilities that a normal high school wouldn’t give you.” 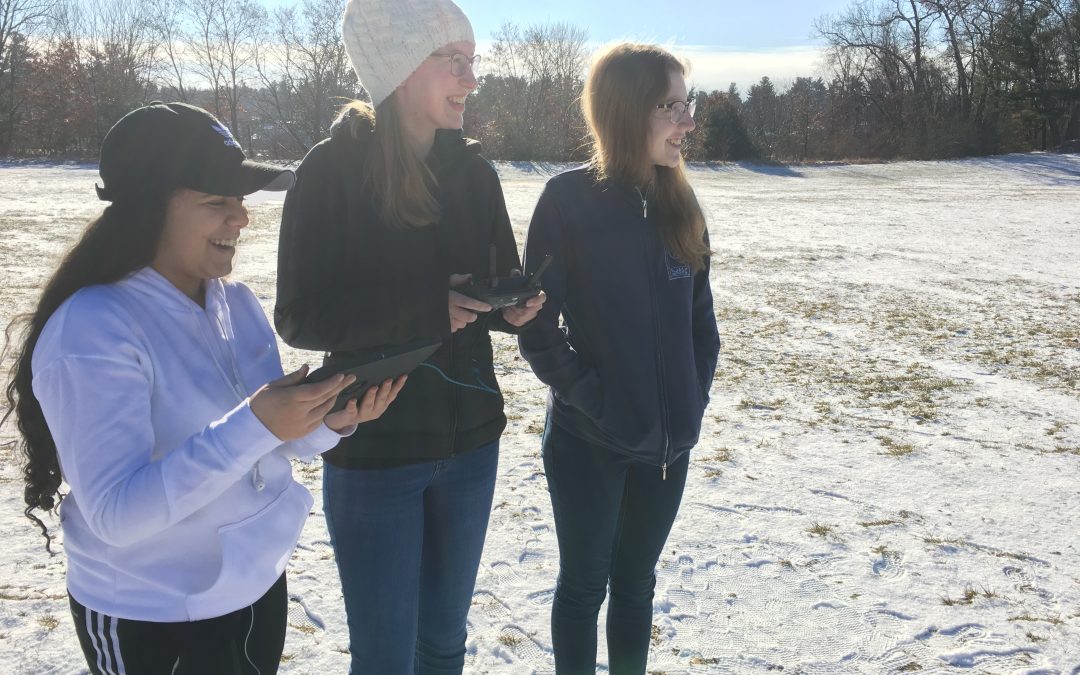 Full ‘Steam’ Ahead for New Program at NTC

What started as a conversation in November 2017 among several staff has turned into Drones & Technology, a full semester class that will launch for the 2019/20 academic school year at Nashua Technology Center North (NTC).

Geared toward students in the 11th and 12 grade, the program will build off Drone Photography- Girls in STEM, a pilot class that successfully concluded this past November.

Photography teacher Erin Knoetig, who led the pilot and will run the program, said their initial focus on girls reflects inequity in the world of STEAM (Science, Technology, Engineering, Art and Math).

“We know from research that STEAM fields make up the fastest growing occupations today–and studies show that a majority of these fields a segregated by race, gender and income,” she said. “NTC is trying to remove those barriers by creating alternative pathways into these fields.”

Her choice of drones reflects their broad use in industry today.

“I want the kids to get a taste of the occupations you can have with drones,” said Knoetig. “Mapping, surveying, photography, FEMA, real estate marketing, infrastructure inspection, construction inspection, insurance, filming and photography, DOT, building, drone maintenance–the list goes on and on.”

In regards to learning outcomes from the pilot, Knoetig cited several.

“The girls are learning about computational thinking, collaboration, compositional photography elements and growth mind set,” she said. “They are also learning about leading ladies in STEM fields, gender and ethical inequality–these are all very important, relevant concepts.”

In discussing the logistics behind developing the pilot and program, Knoetig said she first had to secure her drone license, which she described as “a scary, yet confidence building experience.” The first step in attaining the license, she explained, was attendance at a Dart Drones class in New York last April.

“I was taught the basics of what I needed to know to pass the test,” she said. “This was no easy task. It took reading maps, flight patterns, math calculations, air spaces, radio calls, airport map information. There was a lot that had to be covered. The test prep questions were not the ones guaranteed to be on the test, but the concepts were…so it was a lot.”

With student feedback overwhelmingly positive from the pilot, which ran during eblock and concluded in January, Knoetig said it will run two more times throughout this school year before Drones & technology begins in September. She said that the best part about her experience so far has been the fact that she has learned as much from the students as they have from her.

“Watching them this past quarter and all they retained from 30 minutes a week has been amazing,” she said. “They have come to class prepared to teach the class about strong women in STEAM fields, I have seen them grow, watched them fail, and it has all been an amazing experience…It was a great environment to teach in.”

To learn more about the program, view Knoetig’s podcast at https://thedronetrainer.com/drone-podcast-58-erin-knoetig.