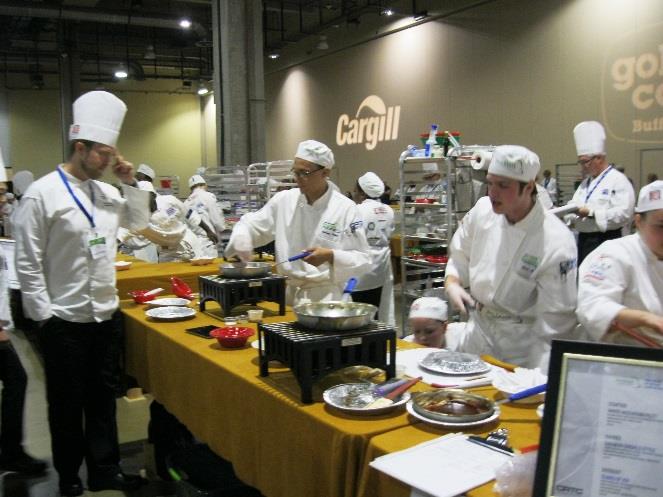 Competing for the first time in any ProStart competition, Concord Regional Technical Center Culinary students made it all the way to the National Invitation from April 29 to May 1 in Dallas, Texas. Placing 22nd out of 46 teams, the team had an incredible experience, according to Culinary Arts Student Chase Haines, who served as appetizer cook at the competition.
“It was great to work with such high-end chefs and to receive job opportunities from them as well as excellent critiques on our dishes,” he said. I think it’s safe to say, we all had an incredible time as a team at the Gaylord Hotel. We also got to hang out with a bunch of other teams from around the country.”
Despite it being their first time competing at such a high level, Chase said the entire team felt confident upon arrival. “We knew what we had to do and the only thing left was to execute it,” he added.
In summing up the team’s performance at the nationals, Bob McIntosh, Chef Instructor at Concord Regional Technical Center, applauded their hard work and determination in just getting there. He said they also responded quite well to adversity in the competition itself.
“At one point, they were 13 minutes behind their normal timing, but pulled together as a team and were able to make up all but 1 and a quarter minutes,” he said. “The judges’ critiques were very favorable in all segments, including telling them that they aced the recipe and costing book.”
Noting it is unusual for a school to enter a ProStart Competition and compete well enough to go to the nationals, McIntosh commended the students’ work ethic and passion for food. He also cited the structure of the ProStart competition format at the state, regional and national levels as noteworthy.

“All of the competitions were well run and staffed by professionals who gave the students very informative critiques, taking time to teach and mentor as well as judge,” he explained. “We had lots of support from many chefs as well as industry mentor, Chef Gary Sheldon. It was also very helpful that the NHLRAEF and the sponsors were able to finance most of our trip to Texas.”