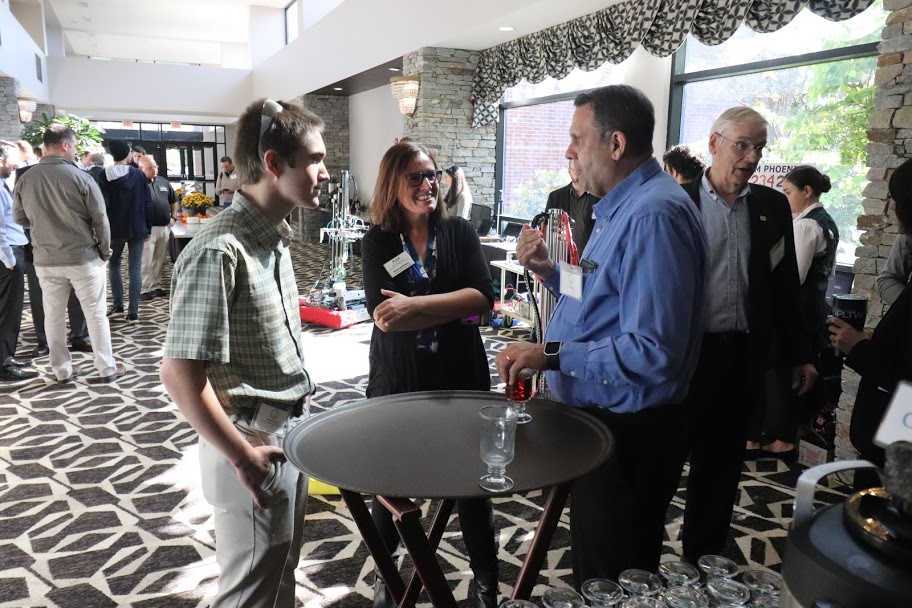 For the second year in a row, the conference also included secondary teachers and students, the latter of whom displayed their own projects and presentations.

“This platform has became an outlet for students to experience learning outside of the classroom,” said NHEJS Board Member Frank Xydias of the Milford High School & Applied Technology Center. “It also gives students the chance to work alongside of engineers and meet engineers that can become a positive influence in their career development.”

In hosting the conference and inviting students and teachers, Xydias said they take a meaningful step toward achieving their mission “to provide education, leadership, and support for the profession of engineering across all disciplines of practice.”

As far what he hopes the public can better understand about engineering, Xydias cited its ubiquitous nature.

“There are over 40 type of engineering degrees and a multitude of subcategory professions,” he said. “An engineering career can lead to many other professions.”

He also noted that engineering need not be viewed as an onerous subject, either. At its core, he said, engineering is about people who like to problem solve.

“As young children, we are trained to become engineers,” he said.

He cited various toys as examples in which children learn to become engineers. These examples included Play-Doh, toy models, LEGOs, checkers, chess, and other games.

“It uses vocabulary and actions of injection molding like ‘extrude, form, press, fit, mold, gate, sprue’ and similar terms,” he said. “As an educator of engineering, I bring back wonderful childhood memories of building LEGOs, using play-doh, or playing checkers back into the classroom. These recollections can be a powerful way to make connections for students that keep them engaged and learning.”

As for the subjects discussed at this year’s conference, Xydias said the experts provided deeper insight into each one. Jim Issaak of IEEE, for instance, talked about recent developments in Artificial Intelligence and its emerging role in our professional and personal lives.

Frank Edelblut, commissioner of the NH Department of Education, presented “The Role of Education in the Tech Era.”

“It was a great conference that helps set the stage for what’s next in engineering,” said Xydias.

As for what is next, Xydias acknowledged he is not sure, which he said makes the engineering field so interesting.

“Kids in kindergarten this year graduate in 2031,” he said. “The careers that students will be going into have not yet been developed, and STEAM and engineering careers are the foundation of these changing careers…We might find ourselves in scenes from Star Trek, 3d printing our food, flying to the store, or working with some other futuristic AI.”