“Manufacturing” a Path to Success 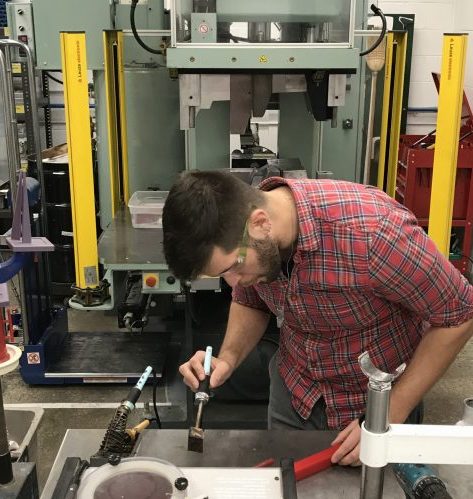 A 4-year college or university is not the only pathway to a successful career, which is something Joe Peterson wishes he knew when he graduated high school in 2008. Acknowledging he felt pressure to attend post-secondary school of some kind while also admitting he had no concrete plan for his future, he enrolled in a community college and earned an associate’s degree in software development. His “plan,” however, did not go according to plan.

“I worked three jobs while going to school and my degree turned out to not be worth the weight of the paper it was printed on,” he said.

For Peterson, his inability to formulate a plan for his future had nothing to do with a lack of ambition.

“I was a run of the mill straight ‘C,’ student, but it was a reflection of my interest in what was happening in the classroom rather than my intelligence,” he said.

In 2011, though, he heard about opportunities at Hitchiner Manufacturing Co., Inc.

“I got a job in the foundry and could afford to work one job,” he said. “I felt I could get put my head down and work, get stable and then reevaluate things at a later date.”

In 2014, Peterson was approached by Hitchiner to enter its “Path to Success – Hitchiner Succession Leadership Program.” Developed in 2013 by senior leadership at the company, the program provides a path for hourly employees to become a quality, product, process or manufacturing engineer without the need to obtain a bachelor’s degree in engineering.

“I took classes at Hitchiner facilitated by Keene State College and and classes at Manchester Community College,” said Peterson. “Hitchiner covered it, too. I think the only thing I had to pay for out of pocket was one book.”

“It’s been a great experience,” he said.

According to Tim Sullivan, Vice President, Corporate Affairs and Services at Hitchiner, Path to Success addresses a core need at the company and in the manufacturing industry itself.

“Unemployment at 2.5 % will be sustained through 2020, and we know we need to add to our workforce—maybe a couple hundred new employees,” he said. “The question is how do we attract new people?”

The answer, according to Sullivan, includes multiple “value propositions.”

“We offer a free health care clinic on-site, so that along with Path to Success and tuition assistance are our ways of providing alternatives to high school graduates,” he said. “Come to Hitchiner, earn a good wage, learn a trade and have zero college debt…Other companies in our industry are doing the same thing.”

On November 28, Peterson will talk to students at ConVal Regional High School about his experience at Hitchiner.

“My takeaway is that there does not need to be a rush for students to go into a four-year school when you turn 18,” he said. “Had I been introduced to a manufacturing environment when I was younger, I would have focused on that.”