Nothing “soft” about skills displayed at NH ProStart Invitational 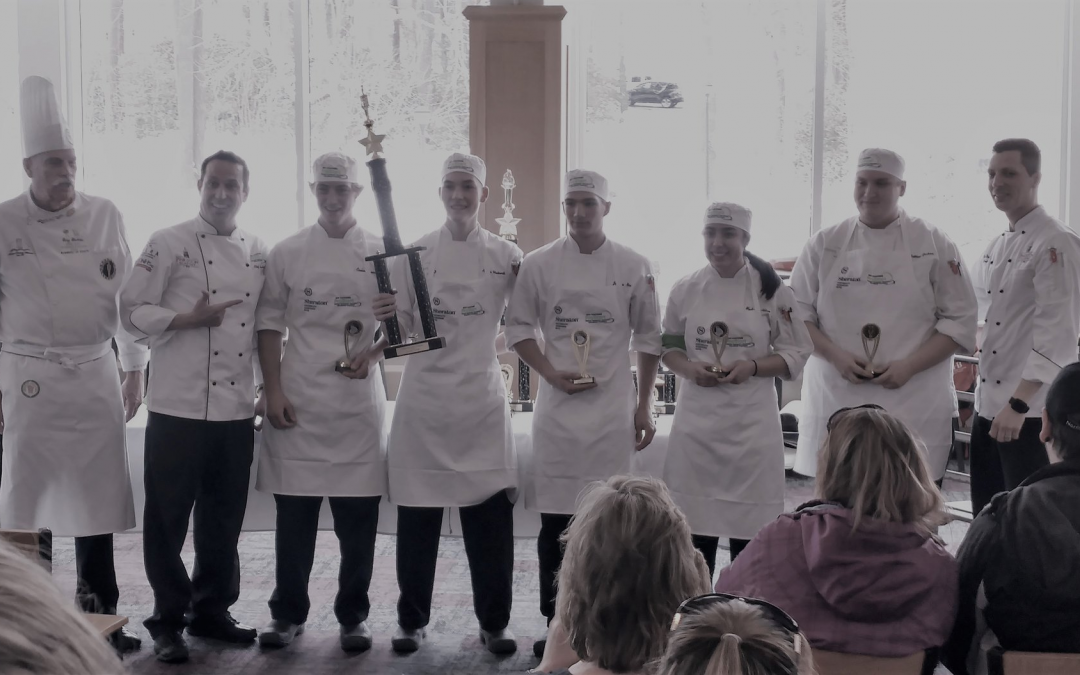 Although often referred to as “soft,” teamwork, communication, problem solving and critical thinking are skills in high demand in the workplace today, which makes the NH ProStart Invitational so unique.

Held in early March at UNH, this culinary competition pits high school teams from across the state against one another, as they demonstrate these skills through the preparation of a three-course meal in 60 minutes. According to Mark Cahill, lead culinary arts instructor at Pinkerton Academy, there is several mitigating factors that make this competition particularly difficult.

“They only have access to two camp-style butane burners with no electricity or running water,” he said. “It’s intense, but the judges still expect a high-end restaurant quality menu.”

The efforts by students at Pinkerton Academy paid off, as they placed first (two years running) in the culinary division with a menu Cahill said you would expect at any fine dining establishment.

“They did an incredible job,” he said. “I’m very proud of their accomplishment.”

The next stop for the culinary team, according to Cahill, is the National ProStart Invitational later this month in Providence, Rhode Island.

“We are excited,” he added.

“Managing” success
Keith Desjardin, culinary instructor at Pinkerton Academy, is also excited, as his team placed second in the management portion of the competition. In this division, students developed a restaurant concept, vetted it and presented it before a panel of hypothetical investors.

“Their concept was a restaurant in a strip mall close to a university with local artwork on the walls, a large stage for local musicians during lunch and dinner service,” he said. “They has to present their menu, floor plan and marketing strategies. They also had to answer critical thinking questions and how they would resolve certain issues.”

While initially proud of their accomplishment, Desjardin acknowledged his team was “bummed out,” however, when they discovered how close they were to actually winning and qualifying for the nationals.

Like Cahill, his excitement regarding the competition also stems from the deeper implications regarding what it means for their future.

“Even if they don’t continue in the program here, the soft skills they have learned can be applied elsewhere,” he said.

He said it is not just about the food either.

“It’s their understanding of the financial aspect of things—covering labor and other costs,” he explained. “They are developing teamwork , interviewing and presentations skills as well as personal responsibility. They are thinking on their feet, collaborating, compromising, adapting and evolving concepts. They are learning about the importance of being on time, dressing professionally, public speaking…These are the skills employers are telling us people lack today.”

As with many CTE programs, there is strong participation from industry in the competition with Cahill noting his students already have job offers from Bobby Marcotte, program mentor and executive chef and owner of Tuckaway Tavern and Butchery in Raymond.

“He has been in Guy’s Grocery Games—he is sort of our celebrity chef in New Hampshire,” he said. “He just reached out to all my students and wants to employ all of them.”

To learn more or to become involved with NH ProStart, contact Amie Pariseau at apariseau@nhlra.com.