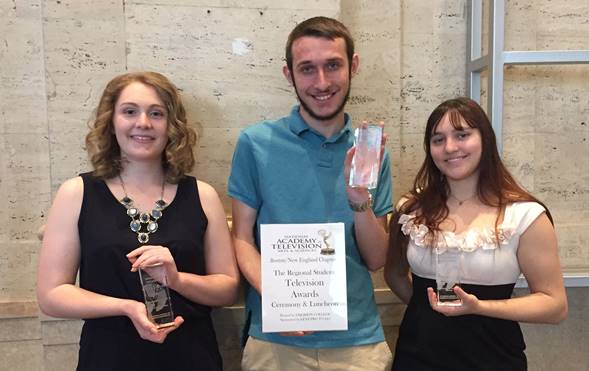 Distracted driving is a societal problem and one that 3 students in Pinkerton Academy’s Video Production program tackled head on this past spring in their production of videos for The Community Alliance for Teen Safety.

Producing, shooting and editing a 30 second, 1 minute, and 90 second video versions, the students involved in the project were seniors Ryan Fuller, Jenelle Giordano, and Allison Patt. Along with screenings at local movie theaters, UNH hockey games, local TV and various events, their video, “Finish Your Story,” was nominated and won a “Student Award of Excellence” from the National Academy of Television Arts and Science. The trio also won a student Emmy from the New England Chapter and were nominated for a National Student Emmy by the Academy.

Expressing excitement at the their achievement, Christopher Lord, teacher of Video Production at Pinkerton Academy, said the students did a tremendous amount of work in creating the videos.

“We coordinated with Derry TV and Fire to act as talent and provide ambulances, fire trucks, and cruisers for our accident reenactment scene,” he said. “We hired a local makeup artist to do the gory post accident scenes and convinced a local junkyard to provide us with a couple smashed up cars to finish setting the scene.”

He said they even received some help from students in the culinary arts program. “They chopped us some onions to help a student actor to cry while telling the story of his accident,” he added.

For Lord, one of the highlights of the entire experience was watching the live student Emmys in class and seeing Jeopardy’s Alex Trebec announcing Pinkerton Academy as a nominee for best PSA.

He said another highlight was the quality of the students’ work, including pre-production elements, which helped to shape “ a different kind of distracted driving video.”

“The students surveyed classmates about what they found distracted them the most while driving,” he said. “This survey sent us in an unexpected direction beyond the obvious ‘texting while driving’ and instead found that other kids in the car did silly things, followed GPS systems, and searched songs on their I-Pods. [These things] were what students felt took their eyes and minds off the road the most.”

For Giordano, the entire project represented an incredible opportunity to collaborate with numerous people and entities outside of Pinkerton Academy. She said the biggest challenge was shooting the videos in 5 hours during which time all actors received their special effect makeup done, cars were flipped over and repositioned, and windshields were broken among other elements.

“Although the PSA is short, a lot of time and effort went into creating it,” she explained. “We spent weeks planning and organizing it…I can’t express how grateful I am for the experience. It was just a taste of what I hope my future holds.”

It is a future she believes Pinkerton Academy has helped shape.

“Joining video production at Pinkerton has shaped my future and nurtured my love for film,” she said. “Pinkerton’s video production classes have prepared me as much as they could for the future industry.”

Currently attending Santa Barbara City College online school, Giordano said she will be moving out to Los Angeles in January in hopes to start working in the tv/film industry in Hollywood.

“Chris Lord gave Allie, Ryan, and I so much opportunity with the films we created,” she said. “He believed in our films enough to enter them into many film festivals–and because of that, our resumes have been built up from all of our nominations and wins. I can’t thank Pinkerton Academy and Chris Lord enough for all they have done for me in preparing me for my future.”