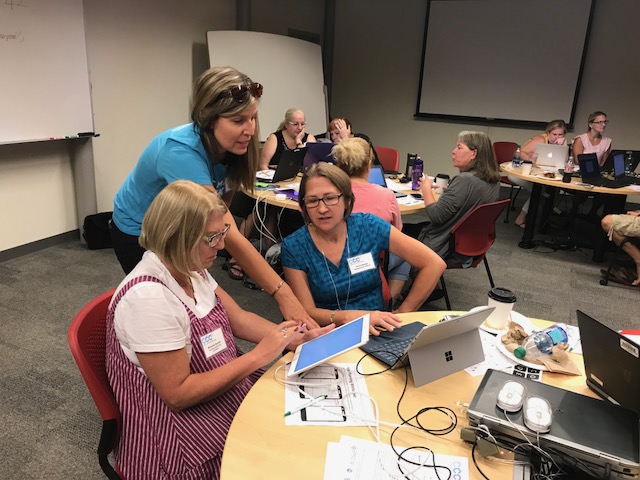 While technology is often seen as an educational end, one objective behind the Creative Computing Challenge (CCC), a five-year program funded by the National Science Foundation, is to highlight its use as a teaching tool.

This objective was met earlier this year on two occasions at Salem High School Career and Technical Center in which teachers from multiple CTE centers convened to discuss Thunkable. An online platform that allows users to build a mobile app for either Android or iOS devices, Thunkable was used by many students in computer science classes this past spring.

According to Heather Drolet, a technology integrator at Christa McAuliffe School in Concord, these teacher workshops provided a unique learning opportunity for teachers.

“Many of the teachers had experience already with MIT App Inventor 2, a program that actually inspired Thunkable, but can only be used to build Android apps,” said Drolet, who facilitated a Thunkable workshop in July.

Selected by the New Hampshire Charitable Foundation as 2017-2018 recipient of the Christa McAuliff Sabbatical, Drolet spent the past year working with many 5th grade classes and teachers around NH.

“Because they had already implemented App Inventor with their students and loved it, they were looking for a way to incorporate iOS app development because of the high percentage of their students with iPhones,” she added.

She said these workshops provided a forum for teachers to discuss and compare the two programs. She said what resulted was excitement at the prospect of having a new tool in their toolboxes that they could use to bring “real-world, authentic learning experiences to their students.”

“They asked a lot of practical questions as we built sample apps in Thunkable,” she said. “We also had a robust discussion on strategies for implementation of the tool.”

According to Drolet, teaching app development is not just a great way to introduce students to the field of computer science, it makes learning come alive for students.

“We all live in a connected world, and classrooms are no longer confined to four walls,” she said.

As an example, she said a student could build an app that allows users to find and donate to local food pantries.

“This not only gives the students a new skill in app development and a hands-on learning experience–math, social science, and business/marketing standards–it builds relationships with the local community,” she said. “Lending purpose to schoolwork is quite engaging for students. It draws in our reluctant and disengaged students and quite often levels the playing field.”

Inclusion is another benefit from this use of technology.

“Populations that are traditionally underrepresented in the field of computer science–females and minorities, for instance–are given an equitable learning experience that amplifies the positives of human interaction with technology,” she said.

According to Chris Dodge, director of Salem High School Career and Technical Center, the workshops help to underscore changes in computer science in recent years. In particular, he cited numerous changes at their school.

“Students are now getting exposure to computer programming as early as first grade and units in computer science are now integrated in grades 1-8 within the Salem School District,” he said. “We have advanced our thinking, approach and commitment to a K-12 STEM curriculum in just 3 short years.”

This commitment resulted in part from him taking a closer look at the programming they previously offered in a concerted effort to “up their game.”

“[We want] students that will be entering our programs to have a more developed skill set in the areas of engineering and computer science,” he said. “The adoption of this K-12 curriculum is a natural fit for teaching the next generation science standards and enhancing our elementary science curriculum.”

At the heart of these changes and enhancements is computational thinking, which Dodge said is not unlike the scientific method or engineering process.

“It is using and applying logical thought to identify and systematically solve a problem,” he said. “This process involves identifying a problem to solve, developing a solution through the use of algorithms, logical process and trial and error, and ultimately applying the solution on a broader scale.”

He said the value in nurturing computational thought cannot be over-emphasized.

“It moves students beyond the rote and mundane and challenges them to struggle with the challenge of problem solving and real-world application.”

This is the third of a multi-part series on CCC and the relevance of computational thinking in the classroom and industry in NH.