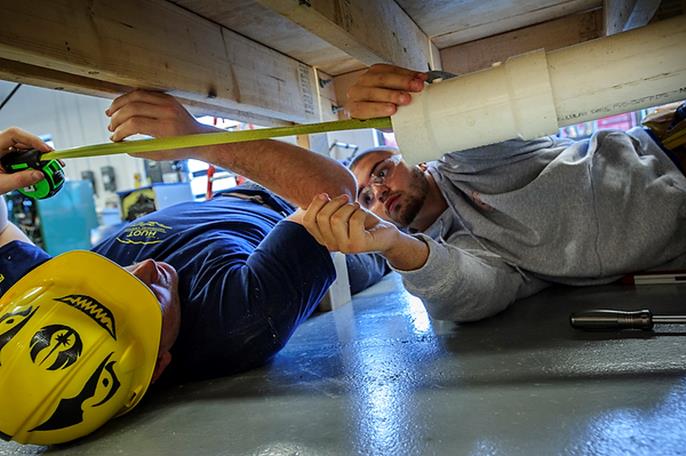 This past June, thousands of New Hampshire students walked across the stage to receive their high school diploma, which included 150 graduating seniors who attended J. Oliva Huot Career and Technical Center for two years. While the Huot Center does not technically hand out diplomas, the center does take great pride in the graduation plans of its seniors.

“Students in New Hampshire’s Career and Technical Education (CTE) centers are leaving high school more prepared for both college and their future careers,” said Huot Director Dave Warrender. The Huot Center, located in Laconia, is one of over twenty CTE centers operating in the state that offer cutting edge training to high school students.

One method for improving a student’s post-secondary options is the awarding of post-secondary credit while still in high school. The Huot Center currently has dual-enrollment and articulation agreements with several schools, including New England College, Plymouth State University and Central Maine Community College. The center’s largest partnership, however, is with the Community College System of New Hampshire through Project Running Start, which has enabled students to earn hundreds of transferable credits from schools within the CCSNH system.

In 2015, 74 Huot students will enter post-secondary education, 43 of whom will work and attend school at the same time. All together, the Huot class of 2015 earned 221 college credits through the Running Start program at Lakes Region Community College, which saved their families $41,000 in tuition. This year’s Huot graduates also included thirty-eight students secured full- time employment.

Career and Technical Centers Redefined
According to Warrender, CTE Centers have gone through a significant transformation over the past thirty years. “In the 70’s and 80’s, CTE Centers were often defined by ‘who’ they taught,” he said. “The ‘voc’ was thought of as a place for kids who didn’t fit in an academic setting and were not worried about getting ready for college.”

During the computer revolution of the early 90’s, however, he said the vocational center transitioned into the technical center.

“Our focused shifted from who we taught to what we taught,” Warrender added. “Technical centers became the places where students explored programs too specific or too expensive to be replicated at every high school, while schools realized there was a cost-savings to running technology heavy courses in one centralized region.”

Through a consistent focus on technology, job readiness and applied learning, he said CTE Centers developed unique ways of teaching students in full recognition that a high school diploma was not enough for many high tech careers. Today, he said CTE Centers are now defined neither by what or whom they teach, but rather by how they teach.

“CTE centers in our state do a fantastic job of blending applied technical learning with soft skill development and college readiness standards,” he noted. “Students are expected to leave not only ready to get an entry level job, but to also pursue post-secondary education.”

From the Students
When asked how the Huot helped them to become college-and-career ready, students replied with a variety of answers. “The Huot helps you achieve so much more than you would ever imagine,” said Bridgette Robichaud of Franklin, an Allied Health student, who has enrolled in the Dental Assistant Program at New Hampshire Technical Institute.

“My teachers taught me new skills and I reached many great accomplishments,” added Liam Gove, who entered the automotive program from Winnisquam Regional High School and secured a position as a boat technician at Winnisquam Marina. “More importantly, the class taught me how to cope with failure.”

Gove’s sentiments were echoed by Joe Judkins, another Winnisquam student that attended the Building Construction program and one of 10 who has opted to pursue a career in the armed services. “The Building Class taught me many professional and personal skills—this built my self-confidence and ability to decide to join the military,” he said.

For five years running, the Huot Center has achieved a 100% pass-rate on the state exam for Licensed Nurse Assistants. One of this year’s candidates, Nicole Rosas of Belmont, could not be more pleased with her experience. “The program and my required 60 plus clinical hours helped me decide what I wanted to do after graduation,” she said. “My teachers gave me great support and were always encouraging.” Nicole is enrolled in Arizona State University’s Nursing Program and plans on working as a Licensed Nursing Assistant while attending school.

The ability to earn college credits has also been an important consideration for students, as is evidenced by Mikayla Bordeau from the Huot’s Careers in Education program. She earned 14 college credits while in high school, including 11 from her class the at career center. She also secured a position with Lakes Region Child Care Services, Inc. and has enrolled in the Elementary Education program at Plymouth State University.

While the majority of Huot students transition directly into a related field, Dacey Lecuyer, a Culinary Arts student, is taking the teamwork and customer service skills she learned in a different direction. “The program has taught me self-discipline and gave me confidence to be prepared for cosmetology school,” said Lecuyer, who has enrolled at Empire Beauty School in Laconia.

Striving for Real World Standards
At the start of the year assembly, Warrender will pose the students with a few simple questions: Who wants to eat chicken cooked by a C- chef? Who wants to bring their car to the mechanic who puts on 70% of their lug-nuts or go to the nurse who gives you the right medication 7 times out of 10?

“At the Huot—like at all CTE centers—students are taught to keep doing a task until they can do it right,” said Warrender. “The experience of performing a task for an actual customer in many cases carries a weight that engages students and pushes them to not just ‘pass a class,’ but truly strive for excellence.”

He said students who work hard, master skills and go above and beyond earn a reward beyond a grade or credit. “They earn the recommendation of their CTE teacher, a person who has real-world experience working in the career path to which these students aspire,” he added. “This is the key ingredient that helped so many of our graduates land jobs this year.”

There is not just one kind of student that has come to value career and technical education, either, as Warrender said many of the school’s top academic student take CTE classes. During the 2014-2015 school year, the Huot Center inducted 27 students into their local chapter of National Technical Honor Society and handed out a record number of academic and career scholarships to their graduating seniors.

“This year, four of Laconia High Schools top ten students had taken courses at the Huot Center, including both the class salutatorian and valedictorian,” he said. “Huot students are also eligible to earn both honors credit and NH Scholars Recognition for many of their career center course.”

As for the Huot’s Center future, Warrender said it looks bright, while citing an anticipated overall enrollment of about 460-470 students in the fall. “We are seeing a real increase in both student, community and business interest not just here but across the state,” he said. “I think everyone recognizes the time for Career and Technical Education is now.”