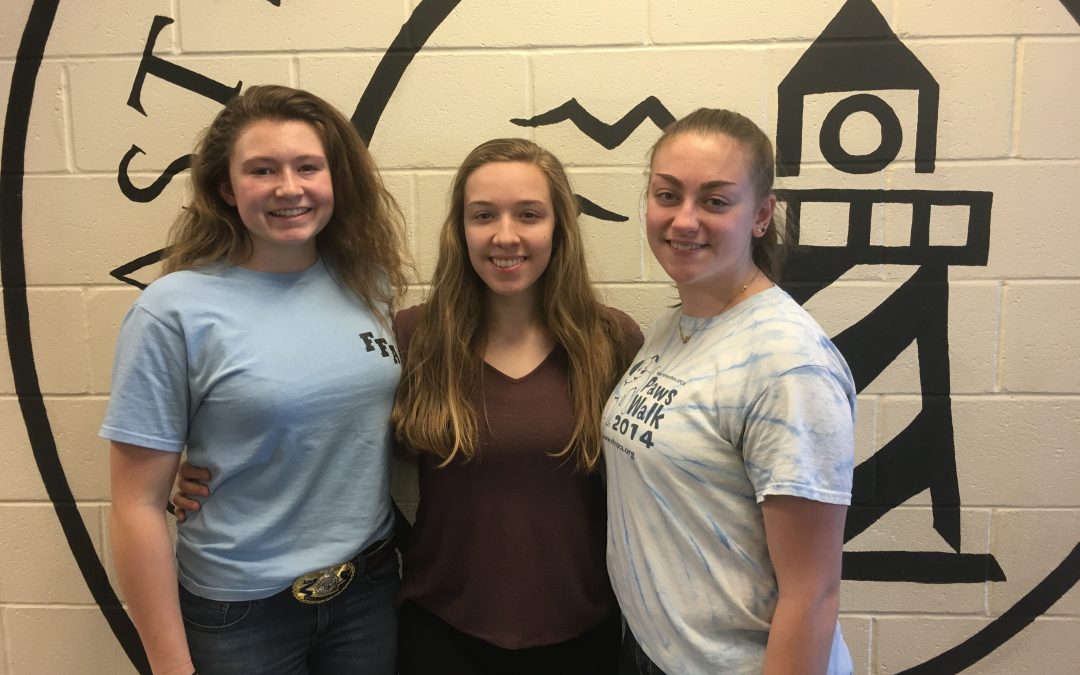 With more than 60 enrolled students, Seacoast School of Technology’s Animal & Plant Science program recently saw three of its own—seniors Jalin Marston, Rebecca Bernier and Madelyn Bentz—achieve success at the national level. Competing in October at the National FFA Convention & Expo in Indianapolis, Marston secured a gold while Bernier and Bentz grabbed a silver and bronze, respectively.

Instructor Anne Demarco said she could not be more proud of their accomplishments. “The girls learned a lot—it was an eye-opening experience for them,” she said. “They did outstanding.”

The students qualified for the national competition after winning at the state level with a project in aquaponics where they grew plants by using fish waste in a re-circulating system. At the national convention, students were presented with written tests and asked to participate in a mock press conference about their project with each student fulfilling a particular role. They also presented in front of a panel of national judges with a project proposal that was submitted in August.

“Our job was to focus on one area for the competition, which was agricultural communication, so it involved marketing and journalism,” said Marston. “The purpose was to communicate about an innovative practice to the surrounding communities.”

Demarco said their performance was even more incredible given the fact the students had only worked together for one year. Whereas the programs at SST are two years, she said those of other states are 4 or 6 years. Some CTE programs in NH offer up to 4 years of instruction as well. “Other kids around the country get to specialize where we provide a little bit of everything in our program,” she added.

Noting one relatively new addition to her program is sustainable agriculture, Demarco said there are a number of skills her students are developing in addition to technical knowledge.

“They are definitely learning team work, time management and working under deadlines,” she said. “They are learning perseverance and networking, problem solving. They are also learning to be courteous and respectful, as we send them to other professionals when they are doing research. The students learn a lot of important skills that will transfer across many areas.”

As for the experience at the National FFA Convention & Expo itself, Bentz said they were “really proud” of themselves. She said the takeaway from her participation at the event national convention was that she is not alone in her ambitions. “It was great to see so many students with such passion for agriculture,” she said. “All across the country, there are teenagers who want to make a difference.”

Noting there were substantial expenses incurred to make the trip to the national convention, Bernier said it was worth it. She cited a private donation from the Pomona (5th Degree) Grange for the area East Rockingham Pomona as instrumental in their ability to also enjoy themselves outside of the competition. “We went to a rodeo and concerts—it was a lot of fun,” she said.

According to all three students, Seacoast School of Technology’s Animal & Plant Science program has been a great experience. They each also expressed gratitude at the additional opportunity to participate in the National FFA Organization.

Referring to it as “a family,” Bentz said FFA provides leadership and professional opportunities. “Whenever you wear one of these iconic FFA blue corduroy jackets, the feeling is indescribable,” she said.

Bernier agreed and added, “All of the jackets on the back have the state you are from and the chapter you are in and an emblem that signifies that everyone is together. We are all potentially a family. We respect each other and we are part of the same organization.”

In summing up what she hopes all students ultimately take from Seacoast School of Technology’s Animal & Plant Science program, Demarco cited a “belief” they can solve anything.

“These kids are capable of thinking outside the box with the skills they have developed here,” she said. “I hope they have also developed an appreciation for the huge field of agriculture—it ties into everything and every industry….Whether we are feeding the world, saving the environment, or helping someone’s pet, our field makes the world a better place.”