Students Think Outside the Box at BizGen 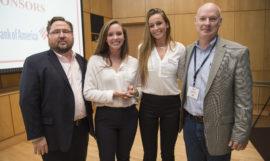 Organized by BizGen, whose mission “is to light the spark in the next generation of business developers,” BizGen is a business competition hosted at UNH designed to inspire students to think like an entrepreneur.

Noting it is still in its infancy stage as a competition, Tiffany D’Amour, Business Educator at Portsmouth High School, referred to this year’s BizGen as “stellar.” “Judges were critical and treated the students as if they were true entrepreneurs,” she said. “These judges were comprised of business professionals and angel investors, who are similar to venture capitalists.”

At this year’s competition in late May, Portsmouth High School teams placed 3rd and 4th with prize money for the students of $1,000 and $500 in total, respectively. Awards were provided to the top 4 business ventures out of 18 teams who entered.

D’Amour praised both teams for their hard work, which began with creating and submitting a 1-page abstract that highlighted their business idea, critical areas needed for success, and the target market. The teams then wrote a 10-page business outline and provided a business presentation pitch to a panel of judges.

The 3rd place team, BookBit, was a business venture whose goal was to capture 65% of college students who do not purchase college textbooks. BookBit provided a digital textbook where students could purchase pages of a textbook versus having to make a large upfront payment for the entire textbook.

The 4th place team, Just in Case, was a business venture based on improving the response time of local police to sexual assault or domestic abuse victims. The company offered a cell phone case where the user could slide and click on a button on the side of the cell phone case that immediately configured his/her GPS location and then directly connect with local law enforcement.

“There is no prototype as of right now for either business, but the students learn the entrepreneurial process with this idea,” D’Amour said.

In Portsmouth, she said BizGen has also garnered interest from outside the Business CTE program.
“For the last 2 years, there has been a team that competed and they were hockey players who met before practice to compete,” she added.

Aside from the value of the experience in the competition itself, D’Amour said she believes students gain skills for the long, term, too. “They learn confidence, speaking skills, thinking on their feet, how to keep calm in a high pressure environment and how to network—all critical skills in the business world and life,” she said.

Katie Auger, who was on the 4th place winner and plans to attend UNH Paul College in the fall, said her BizGen experience was unique, as it helped her “learn about myself and discover another part of the business world.”

“It pushes students to discover interests and talents they never knew they had as well as test their creativity,” she said. “It was an incredible event that challenges students to think outside the box.”

D’Amour also expressed enthusiasm regarding the future of BizGen.

“Ken Johnson, one of the founders, works at F.I.R.S.T, which is a robotics STEM company and he believes in the hands-on approach of teaching and inspiring students to be creative in the classroom,” she said. “It is a local competition with a goal to expand nationally.

To learn more about BizGen as an organization and its various initiatives, visit Biz-Gen.org.