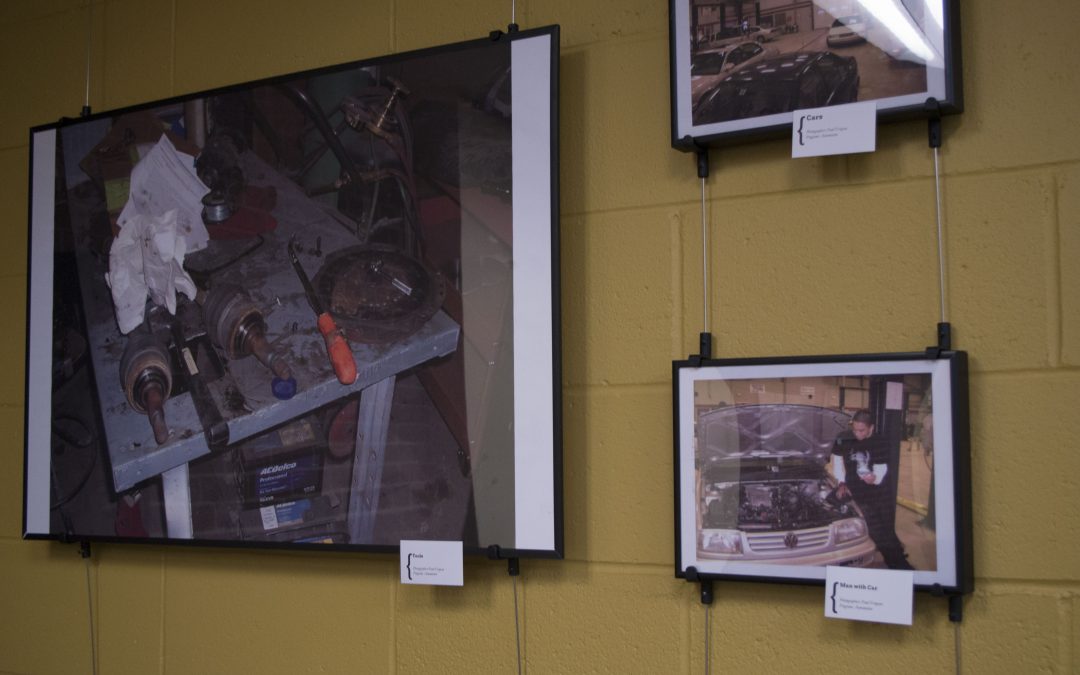 On Thursday, May 11, more than 50 people attended an Art Show at Seacoast School of Technology (SST) in Exeter. Organized by seniors Alice “Doc” Rimkunas Nickerson and Kayleigh Lemire, who are in the Digital Media Arts program at SST, the show featured the work of students from all 12 programs offered at the school.

“We wanted to show off the entirety of what SST does,” said Doc, who noted the art gallery was originally just going to feature the creative work of students in the Digital Media Arts program.

“We thought it would benefit us and the school more if we had art from every department,” she added.

As for the kinds of work displayed at the show, Kayleigh said some were photos of people in engaged in their work in their respective programs. She said a student from the Welding Technologies program provided them with a sculpture that was welded together.

According to Doc, the more subtle intent behind broadening the work featured at the show was to put a spotlight on each program, some of whom are lesser known in the school and out in the community.

“There are some incredible programs here—this was a way to get people to learn more about them,” she said. “It also showed that everything could be art.”

In total, 50 individual pieces were displayed at the event at which food and drink were also provided. Kayleigh added that the Art Show also necessitated that they promote it.

“We created press statements and flyers and other things that we sent out,” she said. “We put it out there to SST and to the schools that send students here.”

Noting they coordinated and planned the entire event as well, Doc said they successfully executed it due to dividing up the tasks between them. She said the event was not without its challenges, however.

“Some departments had less participation—it was a harder sell for them to send us pieces,” she said. “I’m happy that we were able to get every department to at least provide one piece.”

During the process of planning the event, Kayleigh created a documentary.

“I documented the whole thing—getting all the art pieces, organizing everything and showing the before and after at the show,” she said. “I also captured the gallery itself and the art.”

Noting she will attend Emerson College in the fall to study Film Production, Kayleigh summed up her experience at SST by expressing appreciation for what she learned there.

“Before I came here, I had no idea what I was going to do [for a career],” she said. “After taking these classes, I figured out that film-making is what I want to do for the rest of my life.”

For Doc, who will attend the NH Institute of Art in the fall to study comic books, her experience at SST has provided tangible benefits that will pay immediate benefits.

“I know how to make things digitally on the computer and I have marketable skills,” she said. “I have certifications and the knowledge to get a job before I break into my career.”

As for what she would advise any student considering SST or any other Career and Technical Center in the state, Doc said it was the best decision she has made while in school. 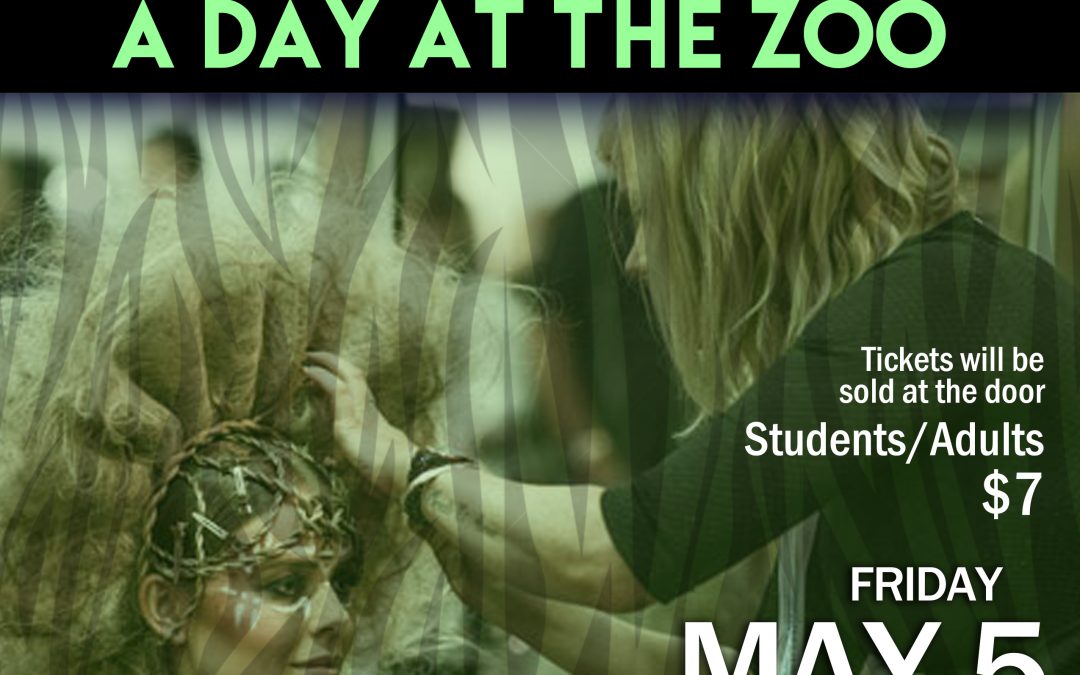 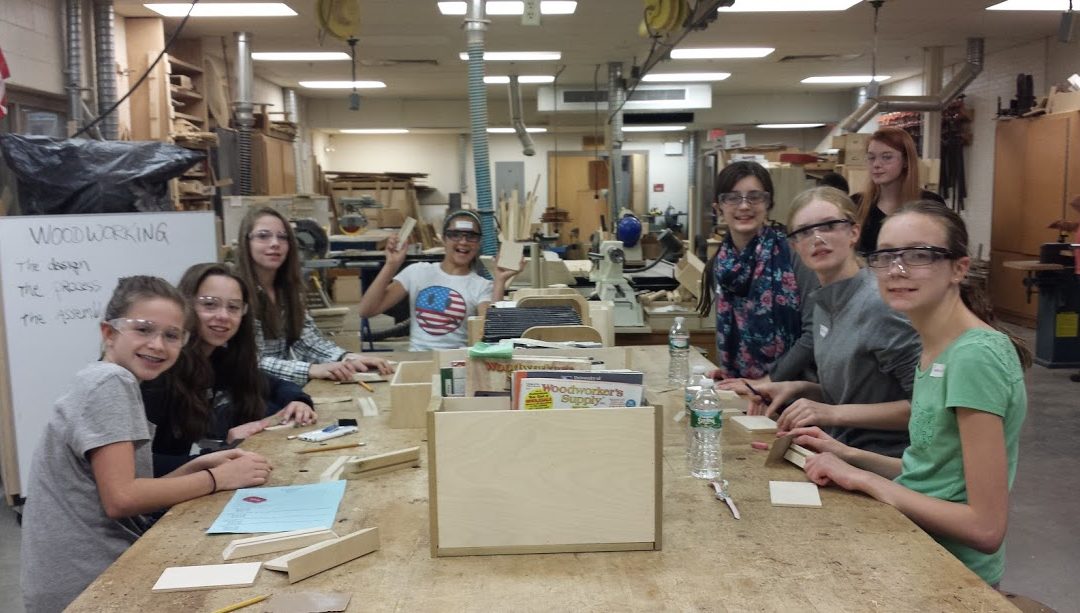 Recently, Milford High School & Applied Technology Center held its fifth STEM event for 4th and 5th grade students and parents, but the real story is what has taken place behind the scenes in recent years. According to Frank Xydias, high school engineering teacher at Milford High School, the concept of these “STEM Nights” all started in the fall of 2014.

“It was important to have a girls only event once the kids reached middle school, as that is the age where the girls start to step back and let the boys take over in STEM related tasks,” she said. “We wanted to make sure the girls had a chance to put their hands on things and do the experiments themselves versus watching the boys doing everything.”

Kathy said she in fact wished she had had more guidance growing up herself.

“When I was growing up, there was far less guidance in choosing a path for college, especially for girls,” she said. “I was over 40 before I really understood what an Engineer did. Looking back, if I had known such a career path was an option for me in High School, I may have pursued Engineering instead of Accounting.

Noting she has been in the engineering program since her freshman year, Jen said she knew from her first course that she wanted to go into an engineering field. Acknowledging that she is also aware of the gender gap with enrollment, she said she wanted to help work on STEM Nights because she herself “knew next to nothing about engineering going into high school.”

“If one of my friends hadn’t convinced me to take the intro class my freshman year, I would most likely be going down a completely different career path,” she said. “The events were extremely fun to both plan and run. I am a huge fan of working with kids, so I loved running the stations and getting to work with them one-on-one.”

With college just around the corner, Jen said she plans to attend the University of Rochester and major in Mechanical Engineering with a minor in Materials Sciences. After college, she said she would like to enter the sports engineering field to design and analyze equipment.

“The STEM classes at MHS have fostered my interest and showed me that engineering is more than just boys working with machinery,” she said.

The results
According to Xydias, their efforts—as well as that of others—to attract more girls to STEM have led to tangible results.

“These partners set-up ‘booths’ similar to what you would see at a trade show,” he said. “They bring demonstrations as well as swag to share with the participants. Parents that choose to remain in the school during the event also have an opportunity to meet these business and industry partners. Representatives from various campuses of CCSNH have also participated as vendors.’”

Also crediting the support of Milford School District Superintendent Bob Marquis as instrumental, Jalbert said he believes they are building some momentum.

“We are very hopeful that what we are building will eventually turn into a K-12 effort that will highlight STEM as an integral part of everyday life in school and beyond,” he said.